The Animals in Our Backyard

Make that the front yard too.

A long time ago, I grew up in a small town. We told people, though, that we pretended to live in the country. We had an acre on the edge of town; we had a large garden; we had fruit trees, blackberries, and a lot that was mostly big, open grass field. No animals, though, beyond a couple of rabbits and a dog.

Except for the wild animals, of course. We occasionally had trouble with the raccoons showing up in the middle of the night to steal dog food. We had deer trek through our garden a couple times each summer. We had the occasional mouse in the pantry.  We even had the rare (and rather implausible) cougar scare. It felt like the country, at least to us city slickers.

I now live in a fairly large city. Our neighborhood definitely isn’t high rises, but it’s a fairly busy urban/metro area. I really didn’t expect to see a lot of wildlife here when we moved in.

Two weeks after settling in, though, I spotted a rabbit in the front yard, happily nibbling grass stems. No, it wasn’t an escapee. No floppy ears, fluffy white coat, or bright spots for this rabbit. It was a small, brown, wild rabbit. 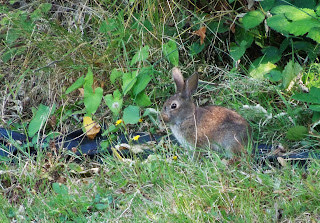 We did have a lot of overgrown vines for it to hang out in, so I probably shouldn’t have been surprised?

A couple months later, we spotted our first deer wandering down the driveway for a neighborly visit. 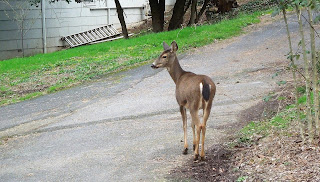 That fall, we had almost a dozen deer wandering across our yard, the neighbors’ yards, the road out front…basically everywhere we could see. The buck apparently liked to rub up against one of the trees in our front yard, because we found a few spots where he had shredded the bark off.

We’ve seen the deer a few times this year too, both when they are just passing through and when they stop to eat my rose bushes or tomatoes.

This year’s highlight, though, was walking into my living room one early afternoon to spot a large raccoon on my back porch. He was glaring at me through the sliding door. I think he was unhappy about the lack of tomatoes on the plant I had left back there, but he sauntered off fairly quickly once I showed up. 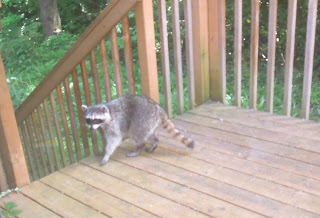 Of course, that was the main highlight until last week. That’s when we got to watch a wood rat playing on our front steps—at noon, no less. 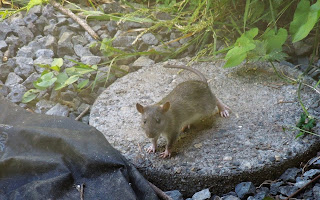 We had talked about getting the kids a couple of chickens for pets. Now I’m not so sure that would be a good idea.