The crows are coming!


Last week, we were trapped in our house by a crow. 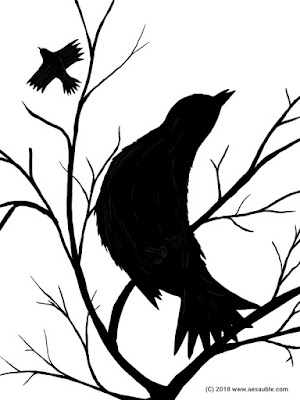 There were actually two crows, and we weren’t in any serious danger.

I went outside earlier than usual that morning—my kids were riding on their trikes in the driveway, and I decided to sit outside with them while I sorted through some papers. After a while, though, I noticed that two crows kept flying back and forth in the trees behind me and screeching.

One would land on a branch just above my head, scream at me for a moment, snap off a twig and drop it, then fly across to the other tree. And repeat.

It felt odd, but hey—I don’t look that much like a scary predator, right? So, why were they picking on me?

Then a neighbor kid came over and told me that he had seen a baby crow on the ground—about five feet from where I was currently sitting.

I guess the crows did have some reason to be concerned, after all?

When I started looking around, there was the baby crow—huddled back in the shadows about thirty feet away from me. (So, make that three crows, then.)

And yes, its parents were still screaming at me. 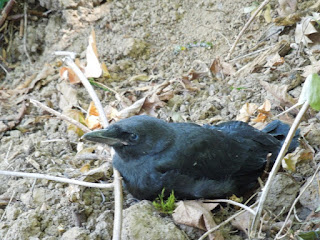 I grabbed the camera for a quick picture, and took the kids back inside, to a window where we could watch the baby crow without disturbing it or its parents.

After we left, the crows settled a bit, but they still flew back and forth around their baby, telling it to stay quiet and wait.

The baby crow didn’t move for several minutes, but then perked up a bit. Once it was sure we were gone, it hopped around on the bank, tried to clamber across a patch of ivy, hopped back into the open, and finally crawled under our blackberry tangle.

Over the course of the afternoon, the baby crow wandered in and out of the blackberries, before finally using them to hop over our fence into the neighbor’s yard and disappearing. 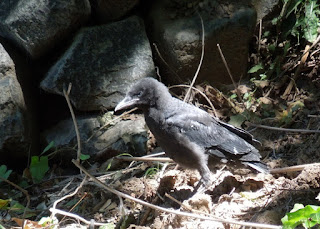 We haven’t seen it since, but there seem to be fewer neighborhood cats at the moment, so I’m hoping it escaped and learned to fly.

Now I'm curious where the crows managed to hide the nest all that time—we still have no idea where it was.