It takes eight minutes for light to reach the earth from the sun. It takes two years for a rocket to reach an asteroid.

Given how long things can take, you'd think that major events would tend to...space...themselves out a little. 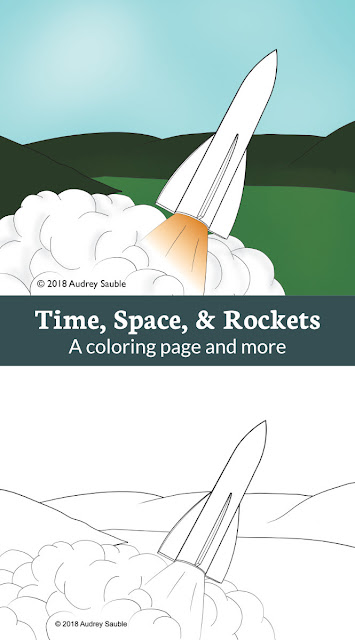 It just so happened that the SpaceX launch was scheduled for 1:31 pm (EST), December 3rd. The NASA broadcast for the ISS crew was scheduled to start at for 1:30 pm (EST), on the same day.

How is that for timing?

As it turned out, the crew on the ISS didn’t open the hatch to the Soyuz model until about an hour into the broadcast, so we could have watched both events live, if we’d tracked things better!

Next time, I guess.

At least we were also able to watch probe OSIRIS-REx arriving at the asteroid Bennu. That happened just a couple hours before the SpaceX launch. It took two years for the probe to reach the asteroid, but now it's ready to begin the next phase of its seven-year mission!

And yes, we are into rockets! We aren’t terribly hardcore, though. With some many other events packed into the same day, we didn’t get up at 6am (EST) for the Soyuz launch.

Given all that, this month’s coloring page is a rocket picture. I sketched it out a couple months ago and wanted to finish it up anyway (time for a break from all those bugs!) Plus, it seems particularly fitting given this week’s space events!

You can download the pdf from Dropbox, here! (No log-in needed.)