A new month means a new theme, and since February is the month of Valentines, that means that this month’s book theme is going to be …

Pluto and the solar system?!

Back in 2015, when the New Horizons spacecraft flew past Pluto, it captured images of a heart-shaped plain on Pluto’s surface. That makes Pluto a great planet to study during February. 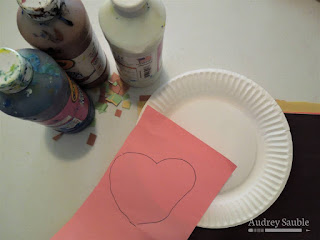 Before starting into this project, though, I highly recommend reading Pluto's Secret: An Icy World's Tale of Discovery by Margaret Weitekamp and David DeVorkin. This book is a fun story about Pluto’s discovery and the debate involving Pluto’s status as a planet.

If you have older readers, I also recommend Mission to Pluto: The First Visit to an Ice Dwarf and the Kuiper Belt, by Mary Kay Carson and Tom Uhlman. This book has gorgeous photos that even younger children might enjoy, but the longer, more technical text would be better for somewhat older children. 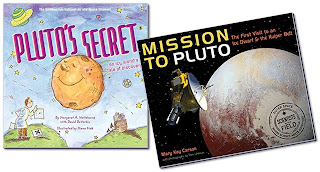 This project is very simple! 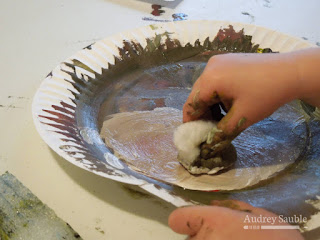 When we did it, we started with a paper plate and painted it a rocky gray color. Then I traced a heart-shape onto the piece of construction paper (using pink paper, of course!), cut that out, and placed it over the wet paint to create the planet.

First and second-grade kids should be able to do most of this project by themselves once you explain the steps. Older students can also skip the paper plate and trace out a circle on a piece of paper instead.
Then, they’re done painting, they can cut out the circle to create their planet.
For preschoolers, though, paper plates are a simple way to make a circle painting. You can also cut out the hearts ahead of time, if you aren’t ready to let younger children use scissors yet. 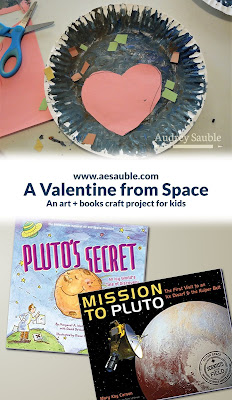