How Big is the Solar System? (Art + Books Series) 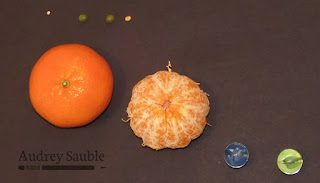 One thing that’s not easy to picture, though, is the size of the solar system.

For this activity, If Pluto Was a Pea, by Gabrielle Prendergast is a great picture book read-along because it focuses on the relative sizes of the planets in our solar system. Another fun book that talks about a scale model of the solar system is The Girl Who Named Pluto: The Story of Venetia Burney by Alice B. McGinty and Elizabeth Haidle. 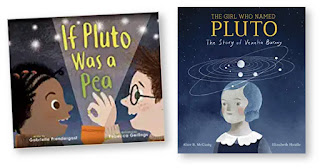 Build a Scale Model of the Solar System:

This is a new version of an activity I did a couple of years ago. You can find the original version here, but I’ve expanded the instructions a bit, and hopefully made it easier to follow!

Supplies (to show the planets' sizes):


I used Exploratorium.edu’s calculator to build this model and set the sun’s size to 21 inches (or 53 cm). You can use the calculator to create a smaller model if you want, but the smallest planets are already tiny at this scale, so I recommend using a model at least this size if you can. 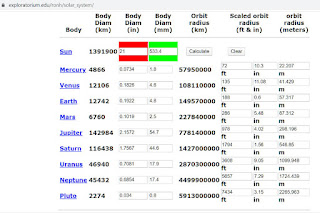 For this project, you will want to use a straight sidewalk or other open area at least 300 feet long. This length will let you mark out the first four planets in a straight line.

If your sun is 21 inches in diameter, that’s about as big as a medium-sized exercise ball. If you have a ball this size, set it at the beginning of your solar system. If you don’t have an exercise ball or something similar in size, then use tape or chalk to mark a circle 21 inches across.

Now, measure 72 feet from the sun. Place a millet seed or a sesame seed there to mark Mercury.

Measure another 63 feet, or 135 feet from the sun, and place a pea seed there to mark Venus.

Measure 53 feet further, or a total of 188 feet from the sun, and place the other pea seed there to mark the earth’s position.

Measure 98 feet more, a total of 286 feet from the sun, and place a peppercorn there to mark Mars.

Mercury, Venus, Earth, and Mars are the four inner planets. They're much closer to the sun than the others, so if you want to continue the solar system from this point, the distances get almost astronomical!

At this scale, Jupiter is almost seven hundred feet further on, at 978 feet from the sun. Jupiter would be the size of a mandarin orange.

In between Mars and Jupiter is the asteroid belt—around 40,000 asteroids no larger than grains of sand at this scale.

Beyond Jupiter is Saturn. At 1,794 feet from the sun, Saturn would be about as large as a small mandarin orange with the peel removed. It’s huge compared to the other planets, but still noticeably smaller than Jupiter.

Then, at 3,608 feet from the sun, Uranus would be about as big as a regular-sized marble.

Neptune would be 5,657 feet (or over a mile) from the sun and is a bit smaller than Uranus, but still about the size of a marble.

Finally, Pluto and the Kuiper Belt would be a mile-and-a-half, or 7434 feet, from the sun in this scale-model of the solar system. It’s even smaller than Mercury, though, so it would only be the size of a grain of sand.

And that's how you put the solar system into perspective! 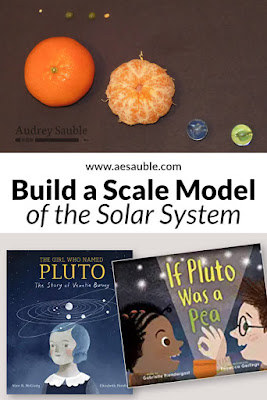 Have you ever built a scale model of the solar system with your students? How did it go?